We were honored to introduce the fabulous Dani Loftus to our NEWFORUM Community! Dani is the Founder of This Outfit Does Not Exist and the Founder and CEO of a new Digital Fashion platform called DRAUP. She is highly known in the space for pioneering Digital Fashion with her Digital Outfits. We were thrilled to have a conversation with Dani about why Digital Fashion is essential right now, the current barriers to mass adoption, and what’s needed to move the industry forward!

Who is Dani? What’s her story, and what led to the Creation of This Outfit Does Not Exist?

Dani grew up loving fashion, she used to watch videos of Thierry Mugler shows or Alexander McQueen, and until she was about sixteen or seventeen years old, she thought she would work in the Fashion Industry.

“I remember sitting at home when I was seventeen or so and about to graduate high school, and I had this big existential crisis. I thought about the Fashion Industry, which was at one point hyper-creative, and very mission-driven for me had become hyper consumer-focused, and I thought this isn’t the ethos that I want to support…” — Dani

Dani made a significant pivot and moved into a social impact fund in New York. From there, she got asked by one of the advisors to join his startup in DeFi. She added that it was DeFi in 2018, so it was an ICO boom. She was working for a lending marketplace that was helping those who didn’t have banks and those who were financially underserved in India to get loans by putting them on-chain.

“You could see the relationship between the lenders and the borrowers, and you could see these people are valid for finances, and so I came in knowing nothing, built that with him for a year and a half…” — Dani

Dani then moved back to the United Kingdom to pursue a job in venture and ended up working for this phenomenal company called Founders Forum, an innovation consultancy.

It was her responsibility to go into large corporates, from energy companies to media companies, and say to them- “here is how emerging technology is going to disrupt your industry, and here’s how you should respond, so what startups do you partner with? How do you invest your money?

According to Dani, that was always one side of her life, and the other side was the love of fashion that had never gone away, even though she didn’t think she would work in that industry. Dani expressed that all her friends were working in the Fashion Industry, and she was always obsessed with Avant-garde clothes.

“I was reading this article where the CMO of Gucci said they would start creating clothes to be produced digitally in the next few years, and something clicked in my head. I thought this Creator Economy, the rise of gaming skin, is something I follow very closely. I thought this made so much sense. We can democratize access to the Creator Economy and make it more exciting through Digital Fashion, so I went to the internet in such a visual fashion thought…” — Dani

Dani couldn’t find the resources on such topics and decided to create her own. She was inspired to start a Substack account, where she wrote 5000-word essays on why this technology is so disruptive and how companies should respond.

She used a similar approach as she had done with her previous job, but then, since Substack is an visual medium, she was able to bring it to life through images. She explained to our community that when the account started, all of the visuals were linked to a newsletter, meaning there’d be one on Digital Design and everything she would design differently.

She passionately shared more about this process and the purpose behind her creative approach, using Substack as her medium in this episode of NEWFORUM.

“ I was pitching news outlets to Bloomberg, WIRED, etc… and their response was; what large brands were in this and I was like no one at the moment, but soon everyone will be, and they were like now we don’t really get it, this isn’t really for us. That was in January, and then by the time March hit, the digital asset boom happened, and what began as my side hustle became something that the whole world started to care about..” — Dani

Dani had about ten months where she was working at her former job as a consultant and waking up at four o’clock every morning to work on This Outfit Doesn’t Exist. After going through the struggle many creators in Web3 experience, trying to figure out if the work they are doing is a real job or a hobby. Dani eventually found her answer, working full-time on This Outfit Does not Exist, a platform bringing Digital Fashion to life through exploration and exhibition.

Each month explores a theme: from Digital Design and distribution to marketing in the Metaverse, with deep-dive features on their advent and possibilities.

We asked Dani about her experience wearing the fabulous BUBA (green) dress designed by TRIBUTE BRAND.

She answered, saying that it’s one of her first photos that ever went viral, one of her big proof points when convincing people, especially in the Creator Economy, to wear Digital fashion.

“ Look at the traction you can get, it can be sustainable, and it can also make you more interesting as a creator” — Dani

What does Dani mean by looking at the traction you can get?

“That dress, for example, when I posted it, I had about 4000 followers, and it got picked up by Dazed and Confused and shared with a million people. I have other photos from the same designer that have had 400000 views despite the fact I have like 11 or 12000 followers, and so that’s a big sell for the Creator Economy; and that dress is a designed TRIBUTE BRAND who were one of the OG pioneers in the space, the Founder Gala, is unbelievably talented…” — Dani

Dani expressed that she has a valued connection with TRIBUTE BRAND because their Instagram and fashion are what first convinced her that she needs to be in this industry.

“Something that I’ve realized as a creator is, what my followers really like is juxtaposition, so you wear a crazy Digital Fashion outfit that combines incredible render quality, so it looks realistic on my body with really high-quality unusual use of material, classic silhouette but with a little bit of a twist and then you put it into a setting where you would never normally be wearing the outfit, and that’s the fast track like key success in my genre of work…” — Dani

What is the current state of Digital Fashion? Will it be mass adopted, and what are some of the barriers that could prevent this from happening?

“I see every single designer will need training in both digital and physical means, and most processes with being done through the computer so that’s kind of the most basic category which is IRL and I think it’s not a massive shift from clothes today, it’s just more efficient way of producing them..” — Dani

“There are these incredible advances in AR both through incumbents like Snapchat who have really invested in body-tracking and also through younger companies like Zero10 who are a phenomenal company, Tribute also developing their AR and so that is considered ORL Digital Fashion. In terms of that, I think the easiest way to hold value is as a B2B business proposition; what I mean by that is businesses in Digital Fashion companies like Tribute brand, selling to other people whose revenue is generated from clothes. That could be me with Instagram, who wants to attract attention, who wants to get presence; it could also be a magazine so instead of having a stylist carrying around a bag of physical clothes you actually can have it all done post-production, which makes it more efficient…” — Dani

Dani explained that the current state of the industry is that for the digital creators, this is artisan work, and the process of rendering or creating an AR filter takes a really long time. This process affects the pricing, which ends up at roughly a hundred Euros plus for the average consumer, who might want a digital dress but would instead go to Primark or fast fashion and buy one for much less than that price.

“You can already see it in games, so the skins market in games is currently at 40 billion dollars, and that shows the new ways that people are excited to engage with fashion. I think what’s going to change is that we’re already seeing a shift in the Gaming Industry from gaming being challenge-based, so you go into the World of Warcraft based on specific challenges or specific quests; to it being much more of a social experience. We’ve seen transitions like Fortnite going into a creative mode where you can’t get shot at, and can interact with friends…” — Dani

Dani gave another example with Meta, saying they will become an avatar-based company. She added that it’s going to shift for each individual person has their own avatar, and we’re going to see a distinct shift of what that avatar is; it could be a picture for profiles.

An example is looking at the Board Ape yacht club craze. Gucci did a collaboration where they dressed the Board Apes. Dani believes that what we’re going to see as things evolve is the real expansion of the direct-to-avatar economy and evolution to a place where we all have our own avatars and in addition to having a variety of different identities that we can dress, which is the third category of Digital Fashion that is starting to take form.

Watch the full episode to hear Dani’s thorough explanation of her three categories of Digital Fashion in this episode of NewForum. She also talked about why she is a part of Tribute DAO, a Digital Fashion DAO well known in the Web3 space, and shared some insights on the benefits of being a part of a DAO as a creator or designer. Dani brought her well-articulated thoughts to an end when she gave us a preview of some of her upcoming projects sharing what she is excited about in the future of Web3.

Join the community to learn about @danidoesnotxist and discover other founders and visionaries in the web3 community! 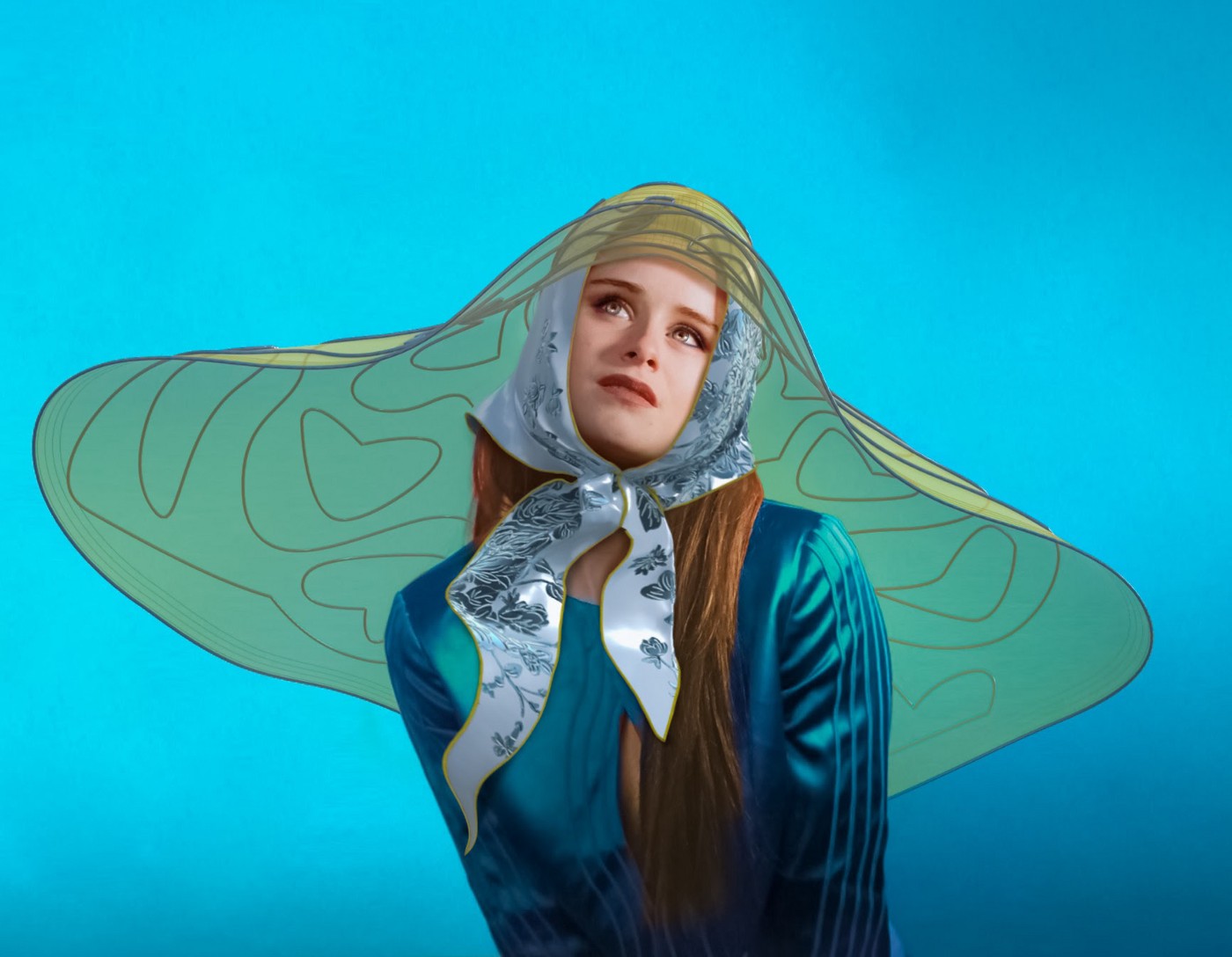 “I was pitching news outlets to Bloomberg, WIRED, etc… and their response was; what large brands were in this and I was like no one at the moment, but soon everyone will be, and they were like now we don’t really get it, this isn’t really for us. That was in January, and then by the time March hit, the digital asset boom happened, and what began as my side hustle became something that the whole world started to care about..”