In this episode of NEWFORUM, we were excited to have an insightful conversation with Charlota Blunárová about the standard design experience in Web3 and what sets it apart from designing for Web2 brands. She discussed the benefits and challenges of working as a brand and digital product designer in Web3.

Charlota, formerly a Design lead at IDEO, co-founded WE3.co, a community-owned design collective working with Web3 companies like Aave, Delphi Digital, Koodos, and NEAR Foundation. She is also behind brands like Lens Protocol and Astroport, open sourced and designed for remixability. Charlota has worked with companies like Chanel, MIT, Moncler, and H&M on creating new products and brands. Besides Web3, she is interested in designing for the future of work, AI x creative tools, FemTech, and the creator economy.

Charlota initially ignored Blockchain technology and cryptocurrencies for some years. It felt a bit more focused on finance, quantitative, and speculative. And that was not her initial interest.

“That changed around the end of 2020 when suddenly, there was this influx of creative people coming into space, through NFTs, mostly, so I saw many creators coming into the space; and suddenly, my overall perception of the space became like, wow, this is more culture and qualitative.” — Charlota

She began asking questions like; what is this space? Suddenly, she saw DAOs emerging with different ways for people to coordinate. At this point, Charlota was convinced and decided it was time to allow herself to go down the Web3 rabbit hole.

“I cannot say I am the OG person who first bought Ethereum at the very early stage, unfortunately. But around 2020, I started diving deep. My first experience was purchasing some NFTs. I did a fashion merge drop for MetaFactory — a place for different opportunities to create digital fashion and purchase tangible fashion pieces…” — Charlota

What did Charlota do after that experience in her onboarding process?

She got on a project which led her to meet the co-founder of WE3, Reid Williams.

Together they received a grant from NEAR Foundation on the NEAR Blockchain. And they started building a platform for DAOs.

She explained that, basically, they were building a tool for Decentralized Autonomous Organizations (DAOs). To be able to find your space on the Near Blockchain. Charlota expressed that that was the first moment she got the opportunity to design a digital product.

She shared more about her experience designing a digital product and how doing so helped her to learn about the Web3/Crypto space.

In her full interview, she further explained how she suddenly realized through her first Web3 project — that there were more designers around her, some of her ex-IDEO colleagues. They were independently working on different Web3 projects and decided — hey, what a great idea it would be to work together. And this is what happened.

A significant component of Web3 is ownership — what does Charlota think about designers needing an investor mindset, and how is Web3 reinventing how designers work?

“I believe Web3 creates a shift as users of products are suddenly becoming owners of products and ambassadors of products, right? So through decentralized protocols, people are participating in the governance of protocols and becoming stakeholders and shareholders, and this is something Web3. But it is a big signal of something that is happening in society at large.” — Charlota

Charlota explained what she meant by happening in society at large in her full interview from her perspective as a millennial.

She shared that there is a trend of people who want to diversify their income streams and place several bets on multiple things — diversifying their income and not putting all their eggs in one basket.

What does she mean? She explains it thoroughly in her full interview.

“I’ have worked at IDEO. We have worked with big companies on their upcoming products, services, their innovation. And we realized that although we deliver a little bit of deep thinking and product design work, we do not participate on the upside if the product or service is successful. And I think that is something that is changing for people who are starting to understand that if they add value early in the process, they should have a stake in the project, product, and the service.” — Charlota

Charlota gave more insights from her learnings as a freelancer designing from Web2 to Web3 in this episode of NEWFORUM and how asking for part of her compensation to be equity in cash but being told that it was complicated; and not worth it, doing it for one independent design work.

It is different in the Web3 space because the team, the founders coming in realize that building for people and with people, for communities, and with communities, and rewarding contributors who helped to shape them, the protocols and the products built on top of the protocols is crucial; part of Web3 and ownership for designers.

“We realized as designers that at WE3, we found ourselves working on different Web3 projects alone, and as part of our compensation, we were getting some equity. And so we acted quickly and decided to take all that equity and put it in one shared treasury. So we all share the upside and other people's work, but we share the risk, so we diversify. Because the only thing we can invest in is our knowledge and our time, right?”

Charlota explained the model they have in place, taking part of the compensation they get for projects of WE3 and then part of it in equity. She added that it could be in different sort of future token agreement, or if a project has tokens available on the open market, they can get a portion of it. Charlota explained designers who work on projects with WE3 get the cash portion of the compensation because she knows very well that everyone needs to pay bills. Although, she expressed that the cash is slightly lower than what one would get, charging usual clients who work only for physical money (cash). And then the equity component that goes into shared treasury.

“ The magical thing about this is that the incentives aligned with the founders, right? So, they are not hiring us for the project or delivering a certain type of work because we have a stake in their company. We get incentivized to help them and deliver the best work we can possible. In addition, we stay in touch with them. So we are building that investors mindset that the Web3 traditionally have been helping their portfolio, companies, as well, as designers…” — Charlota

According to Charlota, that is how they can ensure they deliver foundational design work at the beginning and when connecting founders to each other, or they are hiring someone full-time or trying to get people interested in full-time opportunities — incentivized to take care of the whole ecosystem. She further explained this to our community in her full interview.

Charlota elaborated on a tweeted:

“Designing a brand for Web3 more resembles game design: creating a lore that brings users on a quest and gives them a role, mission, and a toolkit to spread the (brand) messages”

Our community wanted to know why designing for a Web3 brand resembles the game design more and how she relates it to her work with Lens Protocol.

“ Traditional companies have a brand department who craft the brand, logo, and then manage it top down. They control it. Is it the right shade for Coca Cola and is the marketing materials using the right typeface, so everything gets managed and controlled.”— Charlota

Charlota pointed out a post by Other Internet titled Headless Brands, which she explained talked about a new type of brands that emerge bottom-up, are managed by communities, and are evolving without top-down control. So one example of that she gave is Bitcoin.

“If you imagine Bitcoin, you see the logo, you see the orange color, but also you think about the narrative, right? And the narrative of what Bitcoin is is evolving; there is not one sort of PR group or a company dedicated department that will be telling people what Bitcoin is. There is an evolution of Bitcoin being electronic cash, or then sort of center resistant currency or store value or, something that is not correlated to other financial assets on the market. It is still an evolving story, which is forking several times or has forked a couple of times…” — Charlota

Regarding the tweet that she posted, Charlota explained that designing a brand is no longer about the artifact, the story, and then putting it into Brand Book, and then handing it over and saying like, this, is it, use it, or I will come after you. Now, you need to think about a story, and then you have to pick a couple of elements, like seeds that you give to the community, and hope that some of them will start growing and people will start using them. And that is how the brand will evolve.

According to Charlota, you cannot foresee what people will do with the brand, the story, or the assets.

“Example with Lens Protocol, a decentralized social graph protocol built by the team behind Aave. And the idea basically is, if you are using Twitter or Facebook, you have a social graph, right? That is a connection to all the friends that you added to the post that you posted. If you go from Facebook to Twitter, you do not automatically see all the friends that you have on Facebook, it’s sort of like separate walled gardens. The idea is — what if we could, as users own that social graph, which means we could log into Twitter, Facebook, Instagram, and Spotify? And hopefully, in some Web3 future social media apps and not lose these connections to the content we create or the people?” — Charlota

Charlota shared how they (WE3) approached the design of the branding for Lens, which target developers, and how the brilliant metaphor inspired by the idea of owning your digital roots led to the current Lens protocol branding.

How can designers benefit from a DAO, and do all designers need to be a part of a DAO? Watch her full episode to hear her thoughtful response. Charlota shared her views on the next steps for her startup WE3 for Web3. She expressed what she would like to see and what she expects in terms of design in Web3 in the coming years.

The conversation with Charlota concluded by sharing how her team stays inspired and preserves their mental health in the space.

She also gave some recommendations of designs, projects, and books that she has recently been excited about in this episode of NEWFORUM.

Join the community to learn about @0xCharlota and discover other founders and visionaries in the web3 community! 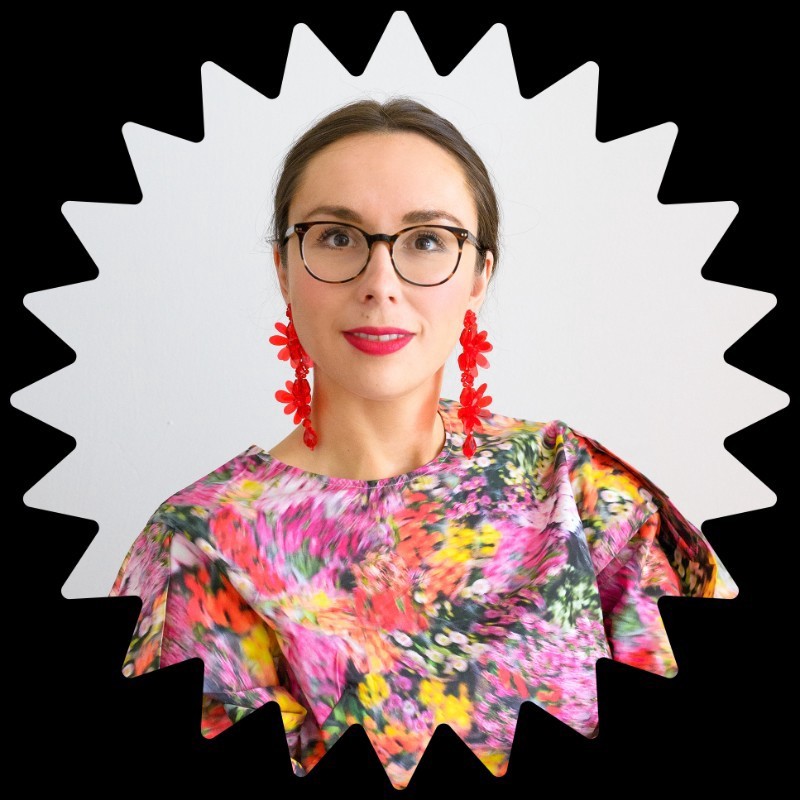 “I believe Web3 creates a shift as users of products are suddenly becoming owners of products and ambassadors of products, right? So through decentralized protocols, people are participating in the governance of protocols and becoming stakeholders and shareholders, and this is something Web3. But it is a big signal of something that is happening in society at large."